THANKS NEO: Thank You Neo for My Anniversary

HELLO NEO, my dear brother. As you are aware, but those reading this are not, my husband and I celebrated a wedding anniversary this weekend. I met him right here (online) and was one of those people who wrote you when he and I we were having the typical online relationship problems and asked you not to make your reply to me public.

I was carrying a lot of baggage from a past relationship and had even been in counselling about it. Somehow your response to me hit me in a way that two years of counselling never did. I really had to take a look at myself and also some of the things I was responsible for letting the man in my life know I needed from him as far as support.

I was so embarrassed the day when he was over for dinner and I left my account online and he saw a new message from you asking how things were going with my relationship. Of course he assumed the worst. He wrote you back telling you none of your d*mn business and we got into a big argument and he left.

What I didn’t know is he tried to continue that fight with you online over the whole week I didn’t hear from him and how much that fight with you would bring him back to me as a very changed man. You know the rest of the story. Six months later we got married and you were there. My hubby invited you and you didn’t turn him down.

That also turned out to be God’s hand because my uncle ended up in the hospital and missed his flight to come perform the wedding and nobody knew until my cousin called from the airport and said he didn’t come off the plane. We had rented the church and and nobody wanted to tell me about the situation. You would have thought out of all the family and friends we had that there would have been at least one preacher in the group.

The story I got was that my mama was calling around. Everybody was calling around. Finally they told my hubby and he calmly picked up the phone and called you and asked if you could do it. He had already read on your site how you used to pastor and still do some things when asked even though you have differences with the church. I didn’t know any of this until I came down the aisle. Neo, I’m sure the look on my face was priceless.

All I can really remember from that day is how God answered through you in so many ways in my relationship. Your ceremony was beautiful and funny and brought the whole day together and the way you talked about us and spoke to us in front of our families at the reception is something that still makes me cry when I watch the video because I never had a father and I felt like I had one there that day even though you aren’t that much older than me.

Anyway I needed to write this publicly because people have no idea half the things you do just from the heart and I want to say on behalf of me and my husband, thank you so much as one of the many people you have touched. We love you Neo. – MR & MRS L. SIMMS

MY REPLY: I love you guys too. I wish you many many more happy years together. I will never forget the joy of meeting both of your families and how you made me feel welcome. Out of the many tragedies I deal with on here on an almost daily basis, seeing your happiness as a beautiful bride on your wedding day is one of the things that give me strength to keep doing this. Take care always and be blessed because you are blessed. -NEO 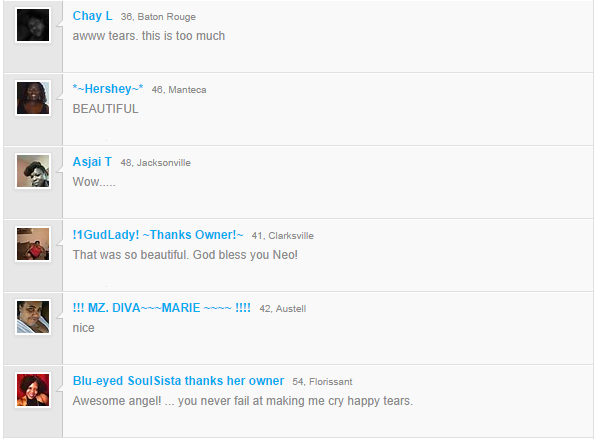