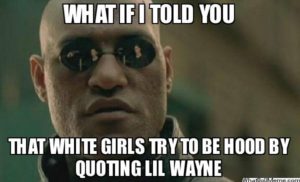 You know what, I was not going to say anything at first but I must be honest. I tend to shy away from white women who have a track record with black men unless I see that she has not totally abandoned her race.

It isn’t that I have a problem with interracial relationships. I am sure black folk are a comfort zone for you and your mixed kids because black people tend to not be as fake as white families about accepting biracial kids. After all, when the slave masters made a bunch of light skin kids by force, black folk never had much of a choice to begin with.

I also have biracial children from my second marriage and have seen first hand the difference. Black families embrace. White families tend to “tolerate” until one foot gets close enough in the grave that they think they better accept those half black kids before they have to go see God. lol.

I have never excluded black women as potential mates. To me, that would be a form of self hate that I am not willing to live with. Because of history and the need for more stable black families, a black woman has always been my first choice. And I have always viewed anybody who ruled out their own race entirely as too mentally unstable to get with.

Still everyone wants to be with someone they can relate to so I leave myself open to whoever my spirit leads me to regardless of race.

But as far as a woman who is not black trying to talk to me, I have never felt comfortable with my race being the reason she has chosen me. In fact, when a white woman tells me she is into black guys, I consider it the most racist thing she could ever say to me. It is not a compliment. It is as stereotypical as watermelon and fried chicken, as if all black guys are the same just because of the color of their skin.

In my experience, the family and friends of most single or divorced white females who have been with black men, especially if she has kids by a black guy, tend to assume she will find a “replacement” black guy because that has been her M.O. And although I know you were just trying to “relate” in using black hood slang in your message to me, it kind of proves my point because you would not have leaned so ethnically heavy in your message if you weren’t trying to relate to me as a black person letting me know your “history” and comfort with black people.

I’m just observing that, in reverse, I would have never felt a need to appeal to your whiteness in a message to you. I find it insulting when a white person tries to pander to my race as if all black people have to speak ebonics in order to be black. I am sure there are black guys who appreciate it. I am not one of them.

My ex was from a small town in Pennsylvania and we agreed from the start that she would never try to speak ebonics, but just be herself. When I choose to speak ebonically, it is no different than how any other culture speaks when they “go home”. But I was also raised by my black parents to believe that the objective of the Civil Rights struggle was to evolve away from language born out of ignorance and a lack of education and opportunity.

I think it sets us back when white folk and this hip hop generation accepts as fad and popular culture, a way of speaking that I was taught to let go of in order to succeed in life. I am being blunt here because we are adults and I believe your efforts to communicate with me to be sincere.

But I also think that we come from two different places in our embrace of blackness. You don’t need to act black to make me think you are cool. Because your interpretation of blackness is no different than when white folk used to wear black face and talk like slaves. And I work too hard trying to mentor black kids into a better way of life than to accept your white representation of black mediocrity.