The Seeds of Forgiveness are Rooted in Accountability 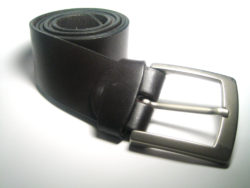 One of the biggest problems we have today is a lack of accountability. When somebody says or does something wrong too many people want to come up with an excuse as to why they don’t deserve any fall out from it. As if somehow the “Christian” thing is be empathetic and group hug and give another chance.

I am all for second chances… AFTER you serve your sentence. Forgiveness does not mean you don’t hold accountable. It does not mean you avoid any measure of pain you have coming to you because of something you did.

I guess that is a lesson most learned by those of us who were actually raised by fathers. When we had a whoopin coming, mama usually did it in anger but dad did it out of principle. And there is a difference.

When dad whooped us, we knew exactly why because he never came out of his feelings with it. It was never personal except to drive home the point. There was no hug later. There was instead an expectation that he would not have to do it again.

For all the things I appreciate about my single mom friends, I can tell you first hand that it is the missing balance of that kind of discipline that messes up most people when they get to adulthood and the reason why I give so much time to their kids who actually crave that level of correction.

I saw it even in the military when young men got broken down for the first time in their lives. The adjustment was easier for me because I went in understanding expectations and accountability.

The same thing happens on jobs when people fail to respect the authority of a boss or a system as if they believe everything is open to discussion and they wonder why they get fired. Much of it stems back to parents who raised their children as their friends. My friends will tell you, I will give my last dime and my last breath if any of them are in trouble. But I am also as tough love as you will find. I don’t sacrifice for foolishness. I leave that to pastors and everybody else who has that calling.

I had a friend’s son who went to war and he wrote me a letter that said “I was confused at first why there was so much yelling and what I thought was meanness in boot camp. But then I came to this war and I realize they were preparing me to live through the craziness of it.”

You see folks life is not always about explanations. That comes with hindsight. I never worry about who hates me for what I do as long as what I do keeps them alive long enough to grow up. Because we all eventually come to understand the reasons.

I was taught by a real man, what a real man is. And unless you know first hand what that experience is like, best stay clear of the suggestion box. Because most of all of these “real man” lists online are written by people who have never known one.