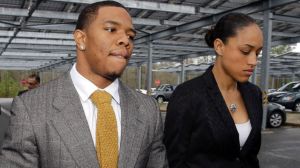 The Ray Rice situation has been on my heart for a while. In everything you read, I have been an advocate for women. And yet the most horrific experience in my life was being arrested and charged with domestic violence. I was unknowingly with a mentally unstable woman and stayed with her because of our children.

Life changes when you are a man with a conscience with a person who has issues. You have to maintain an almost super human level of restraint while they are constantly pushing for negative attention. I never struck my mate. But I had to use my training from both military and take down procedures learned from MDR (Managing Disruptive Behaviors) courses when I was a counselor to keep myself from harm, and to keep her from harming herself.

For years my family lived a nightmare of racist and threatening notes and calls. I lost every contract and job I ever had because no sooner I would leave for work, I would get a call saying someone was trying to break in or there would be a threat to kill my family. I spent every dime I had, made every security effort I could. Even moved more times that I could count, away from family and friends who were also getting weird calls. I had accounts broken into, clients information compromised- there wasn’t anything I did that could escape the constant threat to my family for 8 long years. Until I finally moved so far away and almost stopped living. Until I got a call that someone had actually broken in, tied up my mate, left a racist note, and the kids went running for help.

I made an hour and a half drive home in a little over 40 minutes to see a dozen vehicles with search dogs on the property. I was not allowed to go in. Instead I was told that it was suspected she did it all to herself. Which later led them to tell me they suspected she was behind everything for the past 8 years that forced us into poverty and hiding. It all went downhill after that.

Whatever demon was inside of her decided it would not hide anymore. It had me isolated and cut off from my life and it acted the total fool for 4 more years while I tried to convince her to seek help. I continued to lose every job due to her antics. My new friends were getting mysterious calls again. One even had their child taken away due to a call that was traced to a phone in her possession. Of the many times I had to take her down when she was out of control, the one that scared me the most was when me, as a black man in the south with night clothes on had to get her out of the street, leaving the kids in the house sleeping. I could have been shot with no questions asked.

That was when I knew I had no choice but to seek divorce. I had only married her for what I thought was her protection. She knew that. It was part of her plan to entrap me through pregnancy and create as many distractions as necessary to keep me from knowing the truth. That included even impregnating herself and faking menstrual cycles to make me think it was safe to be intimate. That is what happens when evil knows your heart. She knew I would never deny a child. But the extent that she went to deceitfully deny us any hope of peace or prosperity or happiness is a truth that only I live with the knowledge of.

My career and my relationships were already destroyed. I could only provide for my children by getting away from her. I was stupid enough to be honest and tell her. Next thing I know, she self mutilates, and makes a call saying I am threatening to kill everyone in the house and while I am sitting with the kids watching a movie, an army shows up to take down the bad black man. I spend thousands on legal fees. She gets an army of free white lawyers, and they break every legal rule to get her taken care of as long as she becomes their poster child for domestic violence and uses my kids to tell their lies.

Years later, when she finally realized what she had done and apologized, what could I really say? They had convinced her it was all postpartum from having kids. I already discovered she had done this before she had ever met me in a previous marriage. She wasn’t even concerned that much about telling the kids the truth. The truth of how despite how every person the state interviewed about her claims instead spoke only highly of who I was as a father and that she herself had an open case because of her false alarm which constituted child endangerment, that she got a white southern judge to agree to charge me 400 dollars per hour for supervised visitation over something that never happened. Instead, she offered to meet half way between the states for a booty call. The safest thing for me was to accept the apology, live my life, and wait for the kids to seek the truth on their own. It would have been insane of me to invite her anywhere near my life again. Some things you have to leave to prayer.

Life is more than a video clip folks. I’m not excusing Ray Rice because I don’t really know what happened. I am sure he regrets it. Just like I am sure the woman who went on to marry him anyway is probably now thinking hard about what all this has done to their lives in public. I hope they seek help together. I think this is the part the NFL knew about but could not share because his wife did not sign up to have her business in the news and now they have no choice but to fire Ray Rice due to public pressure. I can only wish them well. -NEOBLAQNESS

The part that I did not have room to say in the original commentary was that the small black female officer who took me in, told all the other officers to go away and that she was alright taking me into custody alone. She was almost in tears telling me it would be alright. She was so sorry but they had to respond no matter what. When I got down to the jail, the nurse who did my intake interview was in tears telling me how she had her own husband arrested for restraining her when she was out of control and he was brought into the same facility she works at and how she was fortunate that he forgave her and that she learned a lot by having to come back to work and tell her co workers what she did and to seek help. When the social services lady came to my home to do my interview, she also left in tears because they all knew the truth- that despite the good intent of the laws, that the Domestic Violence system is crooked and broken and assumes all men are abusers and women are not because if a man reports a woman, he is seen as less than a man. Funny thing is the person who came out in the middle of the night to bail me out, was one of you… one of my sistahs who found out where I was because I was actually helping a friend of hers through a problem on the phone just before I was arrested. That is why I still do what I do and will never stop loving my sistahs. I know that a great majority of situations are without excuse, but its the same as if you are white and called a racist or a child gets mad and says you touched them as a way to get back at you, you can either embrace the stigma, or live your life in such a way that no one could ever see that as being a part of your heart. My heart is in everything that I write, but still that chapter exists. It always will. As it will for Ray Rice and his family. Ray Rice did not restrain. He threw a blow and as long as a video shows that, only those who truly know and love him will understand the context. All he can do is what I finally had to learn to do, and that is to just turn the page.