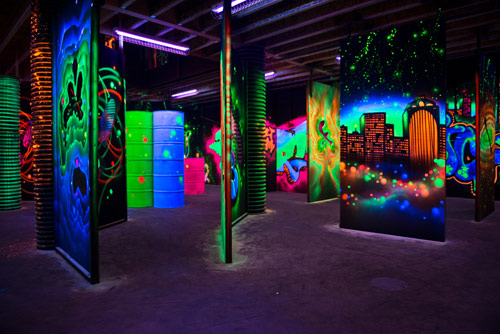 So I plan this surprise evening to take a friend’s kid skating and to laser tag- yeah I know it was a school night but it’s like dirt cheap to go on Tuesdays. Of course this “kid” is almost taller than me and skeered to skate so I had to have fun clowning on that. Later, in laser tag, the payback came. Three little female munchkins from the Wizard of Oz came into the game. They were so small that the laser tag vests looked like turtle shells and they could hide between a crack in the floor. The only way I could find them was by the glow of their lights.

Well me and my over confident Marine Corps training got whooped by a gang of little girls who were all dead set on chasing me the whole time laughing while I scream like a baby running me down all over the place. One would shoot me and they would laugh and surround me and wait for me to reactivate and the other would shoot me. My SO CALLED HELP was someplace else remembering me laughing at them on the skate rink floor.

So we get out of this very one sided battle and the little girls are already out there pointing telling their momma who that was screaming like a banshee. When I tried to explain to their mama that the girls were in total violation of the Geneva Convention, she and the little ones did just what girls do: Stared at me and laughed. I swear, there is no justice for an over grown middle aged black man playing laser tag.