You Aren’t Entitled to Know Just Because You ask 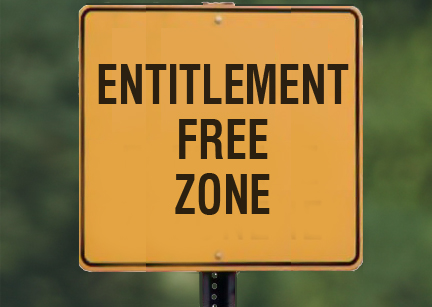 Today one of my newer friends got a lesson in Neo 101 that all of my friends have gotten at one point or another at the beginning of our friendship. She sent me a message that said “What are you doing?” so I replied “What is it that you need?” to which she said “I was just asking”. So I told her “there are only two people in the world who could ever ask me that question, actually three: My mama, when I was a child, my boss when I was not working for myself, and my wife when I was married.” She didn’t quite get the point so I told her the story of my father and my big sister.

My oldest sister had been spoiled by my grandparents so she really thought she could call and make anybody just jump for her. So one weekend, after my parents divorced, I was staying with my father who would always get up at 4am no matter what even if he didn’t have to work. During the summer I would get up with him and we would go out crabbing on the Chesapeake Bay and I would sell my bushels on the streets of Baltimore. But he always got done everything he needed to get done early so that by the time everyone else who had partied all night got out of bed, he would be sitting with his coffee.

So this one Saturday my sister called at around 9am. I heard her ask daddy what was he doing? He said “I’m reading my paper.” And she said “Well good, my car acting funny so you can give me a ride to the store.” So daddy said “Well what was you gonna do if I wasn’t home or didn’t answer the phone?” and I heard her start to answer when he interrupted and said “Never mind answering me, just do it” and he hung up the phone. I never forgot that lesson and neither did she.

It is never good to give anybody the sense that they can ask you anything just to be asking. Before caller I.D. I remember how people used to call and not even introduce themselves and ask “Hello who is this” and they was the one who called you. That was considered rude. The lesson I learned from my sister’s mistake was that she had the nerve to ask a question and then judge for my father whether or not what her was doing was more important than what she wanted when in reality it wasn’t her place to judge because she had no idea what his day had already been like. My father went on to explain to me and later to her that had she simply called and said “if you are not too busy, I really need a ride to the store and I would appreciate it” that even if he was tired, it would have been HIS CHOICE to sacrifice and go.

And people do this all the time. They call you and say “what you doing” and I answer “what you want” and they say “it depends on what you doin” and I say “what I am doing is none ya business if you need something LET ME DECIDE if I can do it.” What usually ends up happening is we answer people at times where they don’t deserve the information and then when they finally tick us off by being inconsiderate of what we are doing, we have only ourselves to blame for giving them permission to judge the value of our time against the value of what they want. I learned that the best thing to do is to not let them do it in the first place. Funny thing, is people actually think you are being rude for telling them that something is not their business that really is NOT their business. That is how backwards things are today.

Especially as a black man, I know there was a time where my father and my grandfather used to have to answer any question a white man asked just because he was black. Even now you got police out of control jacking black men and violating their rights and we are so used to saying “yassir massa” that we no longer teach the basics of self-respect and privacy. It’s always a hard lesson on my friends the first time around, but later on they pay it forward and thank me for opening their eyes.
-Neo Blaqness