Fighting For Freedom While Being Pulled Back Down 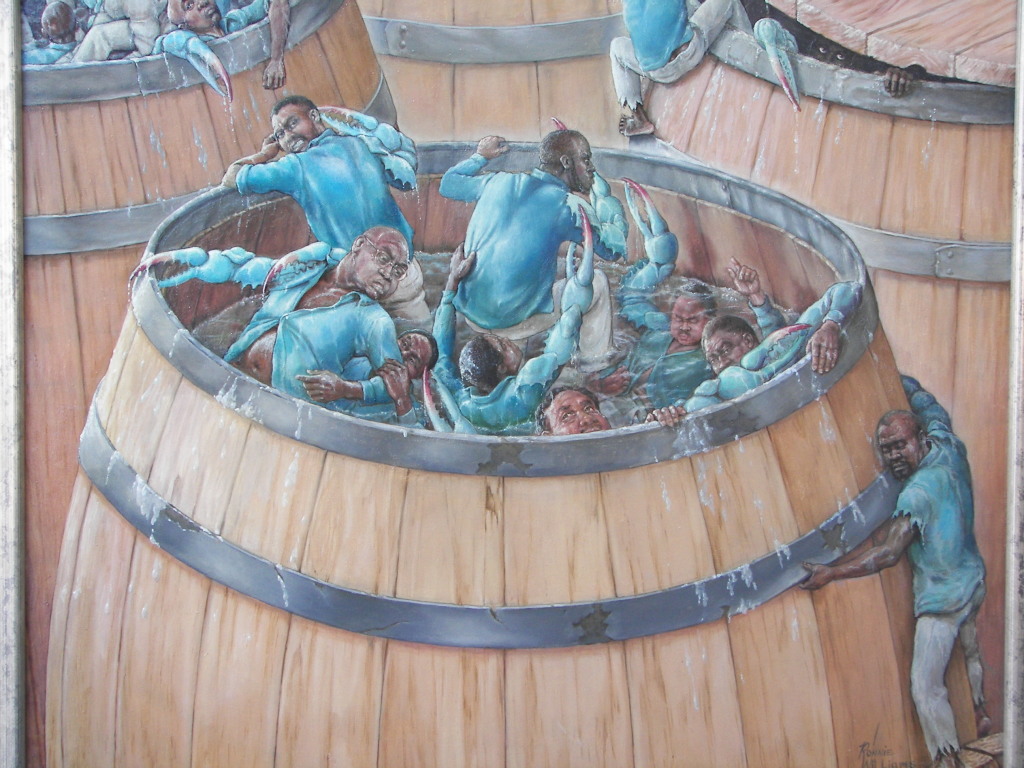 I don’t look for things in others that I don’t also aspire to be; neither can I seriously consider anyone who presents a laundry list of things they want in someone that they themselves can’t live up to. That is why it has always been important for me to stay grounded. But the more you grow, the more you have to deal with people who aren’t genuine and got motives. You really can’t hate them for their motives. It’s a natural survival instinct to want to stay closer to someone who can help you more. But then they don’t realize they have become that person always needing something. They only see because you got more than them or can get more than them that if you really are a friend, they should be able to use that friendship. It’s all logical to them, except they don’t understand it’s not their call.

By always assuming, they actually damage the relationship. That is what black folk coming up outta the hood and ghetto mentality have had to face since the end of slavery. Back in Bmore we called it the crabs in the barrel syndrome. If you ever got a bushel of live crabs they sit there nice and quiet in the basket until you go to take one of them out. You grab one with a pair of tongs and the rest go nuts reaching out with their claws to grab hold and hitch a ride to freedom with the first crab being lifted out. Only they don’t care what they grab or how they hold on. They will pull off fins, break that crab’s claws, even cut it’s body to pieces and kill it in order to keep holding on.

They not trying to kill it or bring it down. That’s the part a lot of black folk who complain about such people don’t understand. They just don’t know no other way to get free so they doing what they only think they can do. But then you got some smart ones in there too who was covered up by too many crabs to move. They wait for drama to start and while you not looking and busy with the chain of crabs who clawing each other to death, they side climb out of the basket. They run like hell for the water and never look back.

I never wanted to be the one who escaped and never looked back. But trying to keep yourself from being clawed to death can also be a full time job as you begin your rise to freedom. All along my journey I have tried to educate people around me as I have learned. Some listen. Some pretend to listen just to stay close. Others just sit back and watch and wait for opportunity to latch on. I deal with all three kinds of people and I know which category they are in. I learned the hard way to pay attention to such things otherwise you end up letting people guilt trip you into letting them tear you apart and drain away everything you ever worked for.

For some, it is their lifestyle- to just use people. For others, if they knew another way, they would take it. And so I at least try to show another way before I choose to let someone go for my own good. And even when I know my reasons are good, it never ever feels good to leave anyone behind. Sometimes I feel as guilty for being born with my mind and my gifts as a person who was born with millions of dollars.

But then I realized that it is really about what you do with your gifts no matter how big or small. The people who inspired me most in my life barely finished high school so I have never seen myself as all that. And as I see my career and my mission grow, it is scary to know there are an increasing number of people who see ME as all that. I never want to be one of those big name black people who talk about black people but have lost touch with real black folk. That’s why I do this. That’s why all of you are important to me. So that as my voice grows, I can be real about what I know is going on with us. I get clawed up everyday doing it this way, but I mend quickly, also thanks to your love and prayers. -NEO