A LETTER: Staying In a Relationship After You Meet Someone Else Better for You 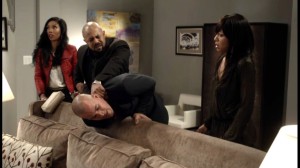 From BET “The Game”

NEO, my question is how do you stay with somebody you discover you really don’t love and don’t really love you after you meet someone you know is meant for you? -KATHYRN

MY REPLY: Wow what a question. It hits close to home because I have been there both as a married person and as a single person dealing with married women. What I do know is these situations normally come about because one or both people got into the relationship for the wrong reasons.

It’s why people tell you never go grocery shopping when you are hungry because you will buy anything and everything. As a man who cooks I can’t tell you how many times I have had a friend call and ask me what I cooked and they will actually leave the food they had right in front of them to come eat mine. They didn’t want to take the time to prepare it and they didn’t have the money to go buy it already prepared so they settled for what they could afford that they didn’t have to cook.

And that is how a lot of us get into relationships especially when we are lonely. That person was the least costly most convenient answer to our needs at that time. But that is increasingly harder to live with now that social media gives us access to so many people with common interests that we would have never met without a computer. It exposes all the lies we have made ourselves believe and when we come face to face with that person who truly stirs our soul it can literally make us sick to our stomach.

Believe me, I have been there. I married someone before that I shouldn’t have married. But there were lives that didn’t ask to be born that were more important than staying single or leaving. At the same time I don’t think people need to be pretending with each other either. I was totally up front about my reasons from beginning to end. I knew from the beginning that person was not for me and told them but I think once you make a baby you have a moral obligation to try to make it work even if that person trapped you, you still chose to lay down with them. The only exception for me was if that person endangers your life in some way and you have to define that within your own conscience.

I lived that danger for the sake of my kids for years and throughout that time there were any number of women prepared to love me better. It broke their heart and mine but in the end they respected me for trying to keep it together. If I had allowed someone to steal me away, how could they believe the same wouldn’t happen to them? Now single, I have run into the same situation with married women who are where I was and I have to turn away despite how real the emotions are. I just can’t do it. I could never live with myself or trust someone who leaves another person for me.

I had a dear friend who went through a lot watching what I went through when I was married. She loved me so much she just couldn’t watch anymore. A few years ago she came to a show and we went to lunch and she just broke down crying when she found out I was single again because she was so lonely that she had just a few months before married a man she really didn’t love and offered to leave him because she had wanted me all that time. I had to get up and leave before I did something stupid.

All I can say is that when situations are supposed to happen, there will be no complications blocking the way. It can be hard to stay true to someone who you know is really not the true person for you, but I have to believe there is a greater reward for staying true to what is right. Sometimes that means discovering more between you and that person than you thought was possible. Or it might mean learning the true virtue of honor for some later reward in life. I don’t know how yours will turn out. I’m still waiting for my own answer. -NEO