A LETTER: Am I Wrong For Not Dating Dark Skinned Men? 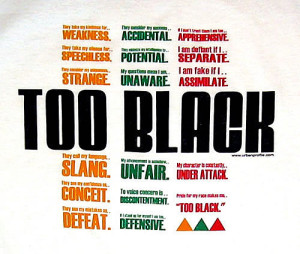 NEO, I had this dude really blast me today cuz my profile say I prefer to date light skin guys? Thats all I ever date. Thats all I ever wanted to date. Don’t I got a right to want what I want? -REESIE

MY ANSWER: You sure do. And you also have a right to get what is coming to you. I count four kids in your pictures and you are only 20 years old and you complaining about their daddies all over your profile so I have to ask how that has been working out for you seeing that you got four kids without a man. Just because we have a right to say or want something don’t always make it the wisest thing to say or do. At the same time there is nothing wrong with saying what you find attractive as long as you understand that the outward appearance does not define the character of the person inside. Beauty is not only in the eye of the beholder but is truly only skin deep while ugliness runs to the bone. The world will never truly be color blind, but you also can’t afford to be stuck on color stupid such that you overlook blessings standing right in front of you.

I suspect that because you are a very dark skinned sistah, you grew up with your beauty being overlooked but as you developed hips, a butt, and breasts, you started getting noticed and you realized you could use that to your advantage. Light skinned dudes are like a trophy to you in the same way that black men who don’t recognize their own worth chase white women. Somehow you feel prettier when a light skin dude is hitting you up but understand that, in the game you are playing, a dog don’t really care about the color of the meat. All they want is a bone and then they gone while you there with your kids alone.

We can replace skin color with anything whether it is height, hair, or what a man got between his legs and you still playing the same game. I have never made any secret of the fact that the darker a sistah is, the more beautiful she appears in my eyes. My mind do get stupid for a minit but not simply in a sexual way. I just find dark sistahs breathtaking. But I am not foolish enough to believe that just because a sistah is dark skinned that she is a better person for me than one who is not and I have never discriminated against any woman based on things she had no control or say in.

All my relationship choices are made from the heart. Scripture says that man looks on the outward appearance but God looks on the heart and seeing that I am also single I guess I am not doing much better than you but that only goes to prove that it is difficult enough when you try to be sincere. So it is even harder when your reasons are shallow. Scripture also warns through a story where Israel had been given all they needed to survive but wasn’t satisfied because it was not all that they wanted and it was written that God “gave them their request, but sent leanness into their soul.”

I would venture to say that this Mother’s Day there are a lot of lean and lonely souls who got exactly what they desired but in the end don’t have the men who made them a mother. And many chose those men for reasons that in the end didn’t serve them well because they wanted a picture perfect man and got a mannequin- an empty dummy, but like the crash test commercial say “you can learn a lot from a dummy”. All I can tell you is that this dummy right here has learned a lot from himself enough to understand that everything gets old and fades and if your reasons for being with someone are not solid, you won’t even make it through the rain, let alone life’s storms. You have every right to continue to go after what you want, but you have no right to keep bringing fatherless children into this world by men whose only qualification to get into your panties is that they are not as black as you are. -NEO