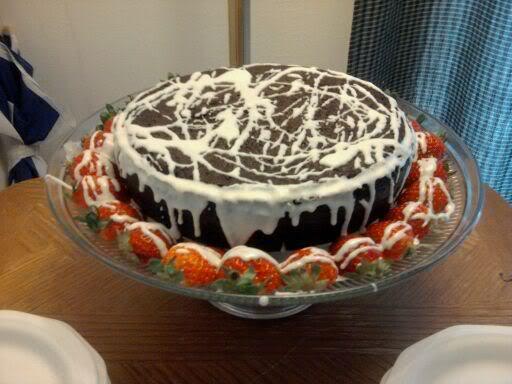 Home Made by Neo

One day I was rushing about trying to finish up some work when I realized that time had just flown by. I was expecting my spiritually adopted girls for dinner so I dropped what I was doing to start preparing the meal. They had become quite fond of seeing a formal table set with all the utensils and plates and linens and I enjoyed teaching them what went where and why.

As I was putting something in the oven and moving on to start the next course, I realized I was out of a key ingredient so I rushed to the store. Bustling through the aisles I knew that I would not have enough time to bake the dessert I had in mind. Never forgetting the hood experiences with my budget conscious mama, I hopped over to the bakery and found a decadent cake on sale that I knew I could make a perfect topping for.

I got back home and finished up just in time for the doorbell and smiling hungry faces sniffing about. One proceeded to her duties of setting the table while the other sprawled across the couch as if no one else would ever want to sit down. After the water and drink glasses were poured and napkins placed upon laps, one shrieked “WAIT!! I forgot to light the candle!!” After we all caught our breaths from this urgent announcement, we held hands, said grace, and ate.

After letting dinner settle I emerged from the kitchen with plates of cake topped with ice cream and drizzled with a warm butternut caramel creation I whipped up. The girls rushed back to the table to dig in. They took one bite and looked at each other as if they wanted to say something but were hesitant. I finally broke the silence and said “What?”. With a somewhat nervous grin one finally spoke up and said “this isn’t yours”. The other chimed in “we can tell”.

I was stunned because I rarely made the exact same dessert and yet they could tell the difference when something was not made by my hands. They ate the cake as if it was out of an act of kindness. Months later I set aside a date for dinner and my day ran late again. At the last minute I did like my mama and swung open the cabinets, looked at what I had, and threw together a dessert that I prayed was worth eating. They ate it all and asked for it again the next time.

I learned that you just can’t fake kids out with store bought love. Even if it is a little late and a little less in your mind, anything done by the heart of your hands is always going to be the best. Sometimes when we are young we don’t realize it. Until we are old enough to think we have it all only to find that we had it all even when we had less. -Neo Blaqness