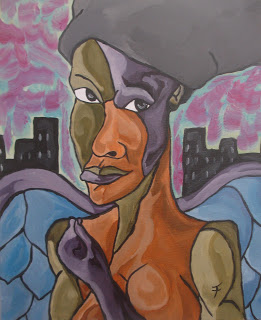 Back in my days as a deejay, I had a friend who deejayed at a strip club. I never really was into music I felt had negative things to say about women  but at the same time, I wasn’t going to judge him or the women who chose to make their money that way. When you grow up in the hood you learn to recognize that unless you plan to pay somebody’s bills, you keep your mouth shut unless it’s a situation that is going to hurt you or your family directly.

There were friends who sold weed, friends who sold ass, friends, who sold bootleg movies, friends who sold brand new stuff so cheap that you knew better to ask how they got it. These same friends spotted you a 20 til the first of the month or helped you with a funeral or wuteva. The angels of hood survival always wore crooked halos or knock off victoria secret wings but they never pretended to be anything more than what they was. When they dropped out for a few weeks to several months you knew either somebody couldn’t come up with the bail money or they was just locked up for a while. As jacked up as things could be in the hood, somehow situations with families and baby mamas worked out some kinda way though there was still a lot of drama.

Anyway my friend didn’t have a car so I would swing by to grab his music for him toward the end of the night. Half the time he was jumping on the bus on his way to someplace and didn’t want a ride. I learned with my friends it was their way of keeping me out of their trouble. Somehow growing up they had a sense I was going to do something with my life and they never really let me in far enough to get my hands dirty. I didn’t find out til much later in life visiting a friend in jail how far they went to protect me.

My father taught us to handle our business and I got into one serious situation where I had to stand my ground. I was a little scrawny sucker up against a bully with a long juvi record and 2 butcher knives trying to bait me into a fight. You know how the hood crowds come out. His own mama called the police and told me to just stay away from him but after he clowned my mama in front of the crowd I lost it and grabbed the knives out of his hands and was about to kill him just as the police showed up and took me down to the ground. That could have changed my life for the worst forever and that was enough for my friends. After that, I didn’t know that my friends messed up anybody they even thought was about to mess with me.

So here I was each night sitting at the strip club waiting for the last song watching the guys get their freak on with the girls and the girls really not knowing what to make of me just sipping on a Coke. After a while they would come sit with me on their breaks just to talk. I learned all about their lives. Sometimes one or more of us would go to Dennys for a 3am breakfast before I dropped them off at home. I never slept with any of them even though the crowd swore I was just buying them off each time they left with me.

I had the opportunity to talk to my deejay friend this weekend who is now married with children. He told me about an old skool party he did Friday night and three of the strippers from the old club were there. I told him I had all but forgotten about them. He went on to tell me about the situations each was dealing with that I didn’t know about when I met them and that they told him I had saved each of their lives. I really don’t know what I did. Just like I didn’t really know what was done for me. All I know is I grew up recognizing that if we don’t stick together, who is really going to care about us? Some of the things we do, we really have no reason to be proud of, but I will never stop being proud of who we are and what we can accomplish just by loving each other.