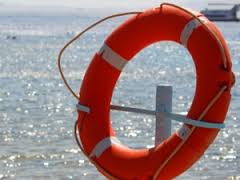 I think it was my staff sergeant in the Marine Corps who warned me that a person who is convinced he or she is going to die will usually find a way to make it happen. He told me to be careful getting too close to that kind of thinking because they tend to take people with them. Growing up on the water, his words also reminded me of why life guards throw you a life ring instead of just grabbing you- unless you are already weak.

A person panicked and in fear of drowning will drown you in the struggle to save their own life. So the life ring is thrown to protect the lives of both people. A lot of people are drowning in a spirit of negativity and the old adage is true that misery loves company. Since they are convinced they aren’t going to make it, they pull you in to drown with them or pull you under in your attempt to save them.

I have learned that as much as you may want to dive right in, love can’t always be a full embrace. Sometimes it has to settle for being a life ring. Don’t fall for the guilt of someone saying you are playing it safe and that the life ring is too impersonal. Remember that a drowning person is usually scared out of their mind and is in no condition to know how to save them self. Eventually, whether it is spoken or not, they will come to appreciate anything that floats, and the person on the other end who pulled them to safety.

Every year between Memorial Day and the 4th of July, we give thanks to the military and others who run into the battle. But today I want to acknowledge those Spiritual First Responders who walk into the fires and through the storms of the lives of others who are too weary to make it out alone. Mothers, fathers, grandparents, teachers, ministers, best friends, siblings, mates, kind strangers, social workers, and those just following the leading of the spirit within. It is often a thankless job, but thank you for all that you do. -Neo Blaqness