The Prodigal Purpose of Anger

PURCHASE THIS CD BY CLICKING HERE 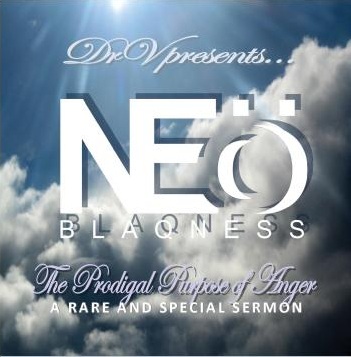 Neo Blaqness is known for his controversial views on organized religion because he is not a big fan of the church and does not shy away from criticizing many religious traditions. However, on rare special occasions, we are afforded a glimpse of his deep theological roots as is the case with a recent sermon upon the passing of a brother to someone near and dear to him.

When asked after the sermon about the, seeming, contradiction to his established anti-religious stand. Ne:o had this to say:

“The sermon was written in the Christian tradition that I grew up in and know so well. It was the tradition of the family it was intended to comfort. Were it a Muslim, Jewish, Buddhist, Pagan, or family of any other faith tradition, I would have endeavored to speak to their traditions as well.

Christianity is where I was born and raised but it is not the author and finisher of my faith. I believe that faith runs deeper than any human interpretation because the names of faith change throughout history. The labels we use today did not exist yesterday and can be gone tomorrow. But what is consistent is that there is a greater wisdom in creation that uses these names and traditions as vehicles of truth to a destination that ends back to the Creator.

If it helps for someone to look at Jesus Christ as the only vehicle, then who am I to say differently? He served as my way to enlightenment as well.  Paul wrote in
1 Corinthians 9:19-23

I will not pretend that your average Bible thumper will look at my methods and proclaim me to be  the  anything close to a Billy Graham. I would never want to be compared to him or anyone else of any faith because I have always considered myself to be a free spirit when it comes down to my views of doctrinal traditions but I do draw upon any and all spiritual wisdom as needed regardless of whose faith it comes from because I know that all wisdom comes from above. “

The sermon, The Prodigal Purpose of Anger, takes a look at the Parable of The Prodigal Son in a way that only Ne:o Blaqness can. Rich in the spiritual traditions of Christian oratory but also full of common sense practical applications to daily living.