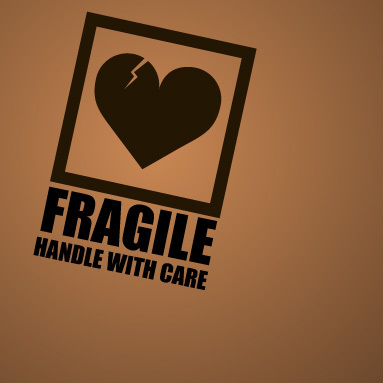 I was taking out the garbage today and I noticed that one of my neighbors, who recently bought one of the units, had thrown away a lot of boxes. One was a lamp box with the word fragile stamped on it in big letters.

Of course I had seen plenty of boxes like that before, but something caught my attention this time around. I guess as you grow older, simple things begin to have greater meaning, and I began to think about the word fragile.

The word on the box was a warning that what was inside could be easily broken. But when we use the same word about a person being fragile, it has a very different meaning. In my mind, a fragile person was usually someone who was weak. For whatever reason, you had to treat them with the proverbial kid gloves for fear of causing damage. I used to think that kind of person was basically punking out on life.

But I grew to learn that there are many reasons why a person could be in a “fragile state”. However, unlike the sign on the box, the difference is that the lamp was actually made out of glass; people are not. People usually become fragile as a result of the actions of other people. That is not the same as becoming physically fragile due to age. I am talking about the point to which we can cause so much weight to bear on someone’s heart and mind that we become responsible for crushing their spirit.

I cannot say that I have ever been truly fragile, but I have been close. But for the grace of God and the love shown through some real friends.

The box was also marked fragile so that it would avoid being put in a place on the truck where it could be compressed by other boxes. Then the contents were wrapped to avoid any breakage from the box just bumping around.

In life, when we wrap our arms around someone, we call it compassion. We are protecting them from the compression of life. The only difference is, people are not expected to need that protection forever. Unlike the lamp, we are all capable of growing beyond a fragile state. But sometimes that requires a lot of protective arms taking turns while somebody strengthens.

But when yours are the only arms protecting a fragile spirit, even when others appreciate what you have done, nobody notices what you had to absorb on behalf of that person. When that lamp box was opened, nobody asked the bubble wrap how was the ride. But it would have been called a worthless piece of crap if the lamp had been broken.

Compassion can be a thankless job sometimes because nobody counts all the things you did to protect someone. Just the one thing you couldn’t. You can’t look for fault or blame. You can’t accept guilt. Sometimes, that’s just life.