The Man Behind Lincoln’s Challenge 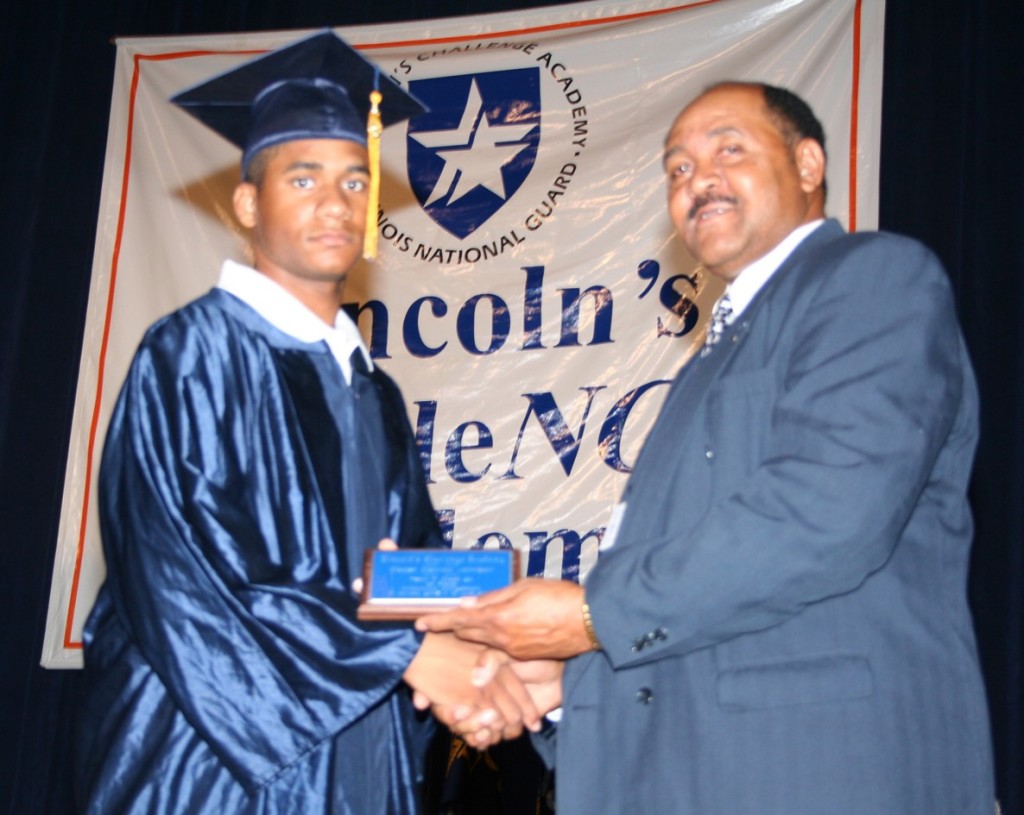 RANTOUL, ILLINOIS (TBP)—Peter Thomas went into the Army in the 1960’s. Like most young Americans at that time, he answered his nation’s call to arms in Vietnam.  His reenlistments lasted thirty years.

Retiring in 1993, Command Sergeant Major Thomas spent his last four years in the military as an active duty senior advisor to the State of Illinois on a project that would become Lincoln’s Challenge Academy, a military modeled education and training center for at risk youth who drop out of school.

With the exception of Sergeant Major of the Army , there is no higher grade of rank for enlisted soldiers than Command Sergeant Major.  The U. S. Army describes the command sergeant major as someone who “carries out policies and standards of the performance, training, appearance, and conduct of enlisted personnel. The command sergeant major advises and initiates recommendations to the commander and staff in matters pertaining to the local NCO support channel.”

In other words, as a top Non Commissioned Officer, Command Sergeant Major Thomas was the voice of the enlisted men when it came to having the ear of policy makers and he helped to translate those policies down through the ranks right down to the new recruit.

When you meet Peter Thomas, it is easy to see those qualities and how they brought him to Lincoln’s Challenge Academy- a place he didn’t expect to be after retirement.

Originally from New Jersey, remaining in Rantoul after retirement was the furthest thing from his mind. Thomas wanted to use his background and knowledge of embalming to open a funeral home.  The only thing was that he didn’t want to do it unless one of his four children would also come on board as an understudy to take over the business later on.

He soon found out the funeral business was the furthest thing from the minds of his children. They were grown and already pursuing other careers.

So when the offer to remain on staff as Deputy Director at Lincoln’s Challenge presented itself, this time, Peter Thomas answered the call of the community.  After serving s Deputy Director, in 2000 Thomas was selected as the Director and has served in that capacity ever since

Like a proud father, Peter Thomas has watched Lincoln’s Challenge grow into a program with a corps of Cadets that number upwards to 400 every six months. He has watched over every class since the facility opened and every class remembers Peter Thomas- but not for the reasons anyone looking at Lincoln’s Challenge as a military based academy would think.

The Cadet Corps of young men and women are all high school drop outs who range from ages 16 to 18 and are referred to the program through school counselors, parents, and even street patrol officers of various law enforcement agencies who might see an opportunity to save a child rather than go down the path of repeat arrests.

Cadets come from all over the state and must be drug free and felony free. No judge can order a young man or woman into the program. Each Cadet must volunteer.

The home and neighborhood environments that the vast majority of these young men and women come from are not always the best. For many Cadets, dropping out of high school is feared by many who refer them to the program, as the first step on the long road to becoming a criminal justice statistic as an offender or a victim.

The academy is free for Cadets with  75% of its budget derived from the Department  of Defense and the other 25% provided by the state.  In addition to physical training, Cadets can complete their G.E.D. and are also dual enrolled in Parkland College for  computer science.

The first five and a half months of the Academy are spent in residence at the Rantoul campus. Cadets are given uniforms and undergo two weeks of hard core transitioning before settling into a daily discipline of physical training, drill, and academics.

Days begin at 5 am with morning formations followed by PT, a 2 mile run, clean up, chow (breakfast), then academics. Each Cadet receives weekly career counseling and is also assigned a mentor who helps them to develop a life plan.

When Cadets complete the residency portion or go home for any scheduled breaks, mentors are notified to take over contact to keep them from being lost to a bad home situation or the streets. Cadets are given mandatory drug tests upon return.

Two things that will result in automatic dismissal from the academy are positive drug tests and fraternization between Cadets.  Cadets are warned not to risk dismissal over trying to find romance.

In most military situations, rules are rules. Nobody knows that more than a Command Sergeant Major who, in many ways, helped to write the book.

But Lincoln’s Challenge is not about throwing the book at someone for their mistakes.  There are many mechanisms of assistance in place that Cadets can turn to before things get that far.  The choice is ultimately up to the Cadet to use them.

When Director Peter Thomas speaks of his Cadets, he can tell you about them by name.

But not unlike the path that took him from a buck private to the highest enlisted rank in the Army, Thomas took the wisdom of his experience as senior advisor and the years of participating with the program’s first Cadet corps as Deputy Director, and refined his duty and that of the staff into a remarkable regiment that understands both the roles of discipline and compassion.

At the time of interview for this article, Director Thomas and his staff were in the midst of assisting a Cadet who had graduated nearly two years prior. The Cadet had gone on to complete an Associate’s Degree  but with the state of the economy, was unable to find a job.

This female was also in a very unstable home situation that threatened to take away everything she had worked so hard to accomplish. With just enough money to make it from Chicago to Rantoul, she showed up to Lincoln’s Challenge where, not only did her instructors and counselors remember her, so did the Director.

This former Cadet was welcomed back, given counseling, calls were made on her behalf to set up job interviews, and she was given two days of follow up tutoring and preliminary testing to prepare her to score better on the Armed Services Vocational Aptitude Battery (ASVAB) because she had expressed an interest in military service if her job searches did not pan out.

Lincoln’s Challenge lets the military experience speaks for itself. There is no push for enlistment. Ten to fifteen percent of graduates join the military with the majority of those entering the National Guard.

But there is also no finer example of the military family in action than seeing that Cadet welcomed home.  And that is not the only way Lincoln’s Challenge honors its commitment.

A personal project of Director Thomas was to establish a memorial for those Cadets who have died in the service of their country. Not only that,  but there are honors for former staff and Cadets who have passed away who have never served.

Standing at the granite memorial and amongst the bronze plates that adorn the trees at the small memorial garden, Peter Thomas can tell you about every name listed.  It is a quality that seems to permeate veterans of the Vietnam Era who had been denied honor for so long by the politics of war.

Abraham Lincoln said at Gettysburg “It is for us the living, rather, to be dedicated here to the unfinished work which they who fought here have thus far so nobly advanced. It is rather for us to be here dedicated to the great task remaining before us “ .

Just as it was for the countless others who served and still serve our nation in uniform, the young men and women of the Lincoln’s Challenge Cadet Corps come from all walks of life.

They graduate with an understanding of their responsibility to their own lives and how their choices make a difference in the community and  world in which they live.